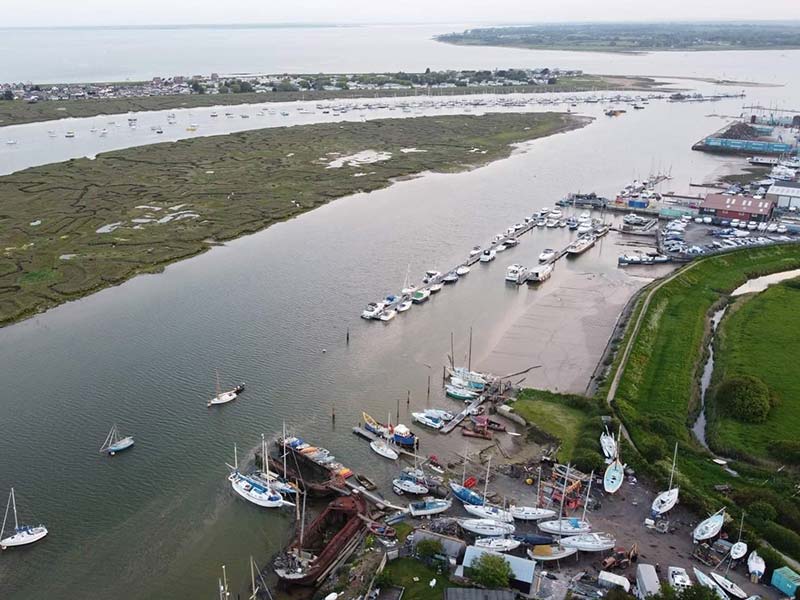 Brightlingsea Creek - BHC to mark the extent of proposed development

The organisation is to hold a series of  interviews with stakeholders that may be affected by the development, which would see 90 new and 25 improved moorings and pontoons at Morgan Marine's Shipyard Estate base. Those against the plans say the new pontoons will impede the navigable channel, making navigation difficult or impossible for commercial and leisure users.

When the plans for the £2m development were discussed by Brightlingsea Town Council on June, 10 the absence of comment from BHC – which has the statutory responsibility for safety and navigation in the harbour – was criticised by some councillors. The plans are now with Tendring District Council (TDC).

However, BHC has now explained that TDC didn't ask for a formal consultation about navigation issues until early June, following which the harbour authority says it "immediately requested and was granted an extension to the time limit for submitting its consultation report, to allow sufficient time to undertake the necessary research and consultation required".

In a statement released to Brightlingsea Info, BHC says that it will be a statutory consultee to both TDC and the Marine Maritime Organisation (MMO) – both of which will have to give approval before the Morgan Marine project can go ahead in its current format. To date, BHC says it understands that Morgan Marine has not yet made a planning application to the MMO, which will submit a statutory consultation request to BHC when an application is received.

The statement continues: "As part of that research and consultation BHC will be inviting individual stakeholder organisation/group representatives to meet with Commission representatives to present their concerns and data. Respondents will be invited to an interview at Brightlingsea Harbour Offices where they will be able share and discuss their evidence with Commissioners. The invitations will be accompanied by an outline of the key points the Commissioners are seeking to clarify to help stakeholders prepare for the interviews."

It goes on: "Stakeholders are asked to note that BHC’s response must be based on its statutory responsibility for safe navigation in the Harbour and therefore ask stakeholders to focus their evidence to the Commission on safe navigation. Other areas of concern will be covered by other statutory consultees – for example any potential impact on water quality or flow will be reviewed by the Environment Agency, the RSPB, Essex Wildlife Trust and Natural England will review concerns regarding habitat and wildlife, etc."

Interviews will take place through the remainder of July and August, after which a response will be drafted for submission to TDC and wider publication. BHC says it will endeavour to contact representatives of all relevant stakeholder groups but anyone who wishes to submit evidence regarding safe navigation in the creek who may not be represented is asked to contact the Harbour Master, James Thomas, to request an interview.

Seen a pothole? Pavement cracking up? White lines faded? Report problems with roads, pavements, drains and verges to Essex County Council here.
report issues
Reunited! Max the cat is home again
Jet skiers: Harbour authorities get tough on anti-social users
Don't miss the latest Brightlingsea news and information. Sign up for the Brightlingsea Info newsletter and stay up to date. Delivered once a week direct to your inbox. No spam guaranteed and you can unsubscribe at any time.
• To be a trusted source of unbiased news and information;
• To promote local businesses, organisations and events;
• To encourage a sense of community in Brightlingsea.
Support us by subscribing to the newsletter, sending news and information, adding events to the events diary and listing businesses and clubs in the Town Directory.
Complaints Procedure
Brightlingsea Info endeavours to adhere to the Editors Code of Practice. Our complaints procedure can be seen here.
Brightlingsea Info,
c/o Big Red Web Design,
7 Marennes Crescent,
Brightlingsea,
Essex CO7 ORX.
01206 305677
[email protected]
Sitemap | Terms |  Disclaimer |  Copyright Notice |  Privacy Policy |
© Brightlingsea Info 2022 | Maintained by
&nbspBig Red Web Design
SEARCH

Stay up to date with Brightlingsea news and events by subscribing to the Brightlingsea Info newsletter. No spam, just info about Brightlingsea no more than once a week.
wpDiscuz
1
0
Would love your thoughts, please comment.x
()
x
| Reply