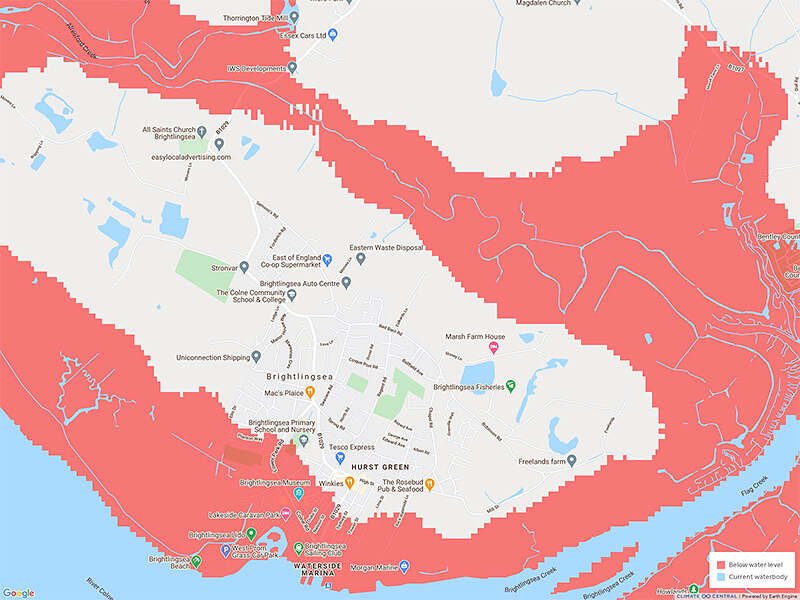 Rising sea levels over the next decade and beyond could place much of the lower part of Brightlingsea and large swathes of Essex at risk of severe flooding, if predictions about sea level rises due to global warming are accurate.

Without taking sea defences into account, higher sea levels combined with a flood could engulf the Promenade, Waterside and substantial part of the lower town with water reaching almost as far as Victoria Place, according to interactive maps produced to accompany the Flooded Future report by Climate Central. Much of the surrounding marshland would be underwater and the town would become an island again as Alresford and Brightlingsea Creeks join up.

Without factoring in an annual flood, the maps – which show land below predicted sea and flood levels – suggest that by 2030 the area around Bateman's Tower, some of the land behind Promenade Way including part of the Leisure Village, parts of the Waterside and Shipyard Estate and most of the land behind the old railway line would be below normal sea levels (see below(.

The report suggests that global sea levels could rise rise by over 2m by the end of the century, and the maps – which can be adjusted to take account of various scenarios – show that large areas of the Essex coast and beyond could be underwater if a flood over that level occurs. Jaywick, Harwich, Parkeston and Felixstowe port would be inundated.  The north bank of the Thames as far as the City of London would be badly affected, with floodwaters covering Stratford, Barking and Dagenham and reaching as far as Redbridge and Romford (see below). By 2100, says the report, land now home to 200 million people around the world could be be below the high tide line.

Climate Central claims that much of the data used to predict the effects of sea level rises in the past has overestimated the height of the land – sometimes by several metres. By using "machine learning working with more than 51 million data samples" it claims to have cut the error to around 65mm or less so that its maps show a far more accurate picture of the land that could be underwater if ice caps and glaciers continue to melt at their current rates.

Stay up to date with Brightlingsea news and events by subscribing to the Brightlingsea Info newsletter. No spam, just info about Brightlingsea no more than once a week.
wpDiscuz
3
0
Would love your thoughts, please comment.x
()
x
| Reply