You are here: Brightlingsea Info > Brightlingsea News > Heritage Quay and ferry landing stage proposals to be discussed by town council 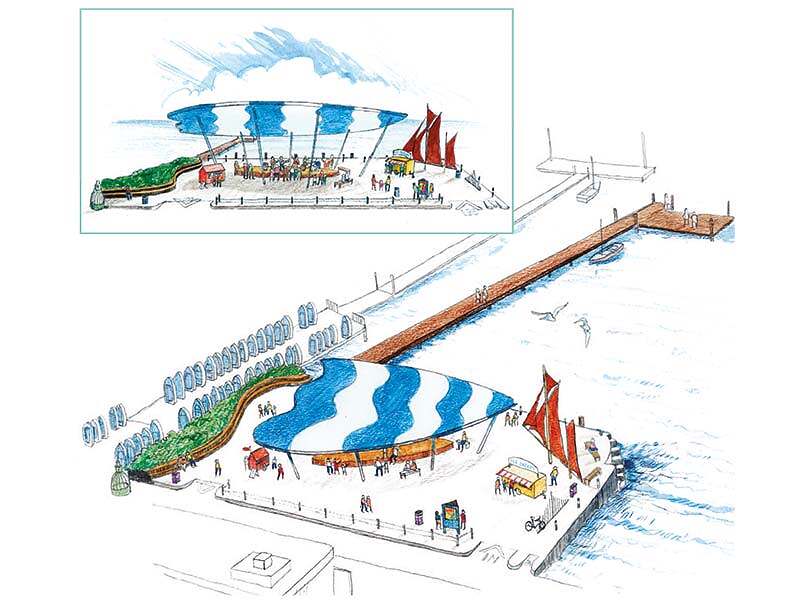 An artist's impression of what the Heritage Quay could look like

Plans for a Heritage Quay at Brightlingsea Hard and a new landing stage on Point Clear for the Brightlingsea ferry will be discussed by the town council at a meeting of its planning committee tonight (February 11).

The plans – which have been drawn up by the council and and are supported by Brightlingsea Harbour Commissioners – envisage a multi-purpose quay extending out over the east side of the Hard and a wheelchair-accessible jetty built out to the low water mark across the creek, replacing the current ferry pickup point on St Osyth Stone.

On the planning application – submitted by town councillor John Carr on behalf of the town council – the Heritage Quay is said to be "designed to host a multitude of everyday as well as special community events", including safe crabbing, with an adjoining Heritage Pier providing enough space for "three or more barges to lay alongside".

The plans for the landing stage show a purpose-built walkway running across the marsh opposite Brightlingsea Hard and ending on pontoons in the creek so that the ferry can be used at all states of the tide and in stronger winds. The ferry – which is operated by Brightlingsea Harbour Commissioners – is popular with residents and holidaymakers but the current beach access is unsuitable for wheelchair users and difficult to cross for those with prams or bikes.

According to the council, the two developments will help provide "a resilient heritage and tourist eco-system aimed at curbing the economic impacts of Covid-19" while "supporting the local economy and vastly improving visitor accessibility and experience".

Brightlingsea Town Council can only recommend applications for approval or refusal. The final say on whether the proposals can go ahead or not will be made at a future meeting of Tendring Council's planning committee. The application, together with supporting documents, can be seen on the district council's website, where there is also a facility for the public to comment. The agenda for tonight's town council meeting can be found here.

Leave a light on for a loved one on Valentine's Day
Betty Blower, Seaview Players stalwart, dies aged 97

Free seaside fun promised at the Fresh Air Festival
Are you eligible to vote next May?

Seen a pothole? Pavement cracking up? White lines faded? Report problems with roads, pavements, drains and verges to Essex County Council here.
report issues
Leave a light on for a loved one on Valentine's Day
Betty Blower, Seaview Players stalwart, dies aged 97
Don't miss the latest Brightlingsea news and information. Sign up for the Brightlingsea Info newsletter and stay up to date. Delivered once a week direct to your inbox. No spam guaranteed and you can unsubscribe at any time.
• To be a trusted source of unbiased news and information;
• To promote local businesses, organisations and events;
• To encourage a sense of community in Brightlingsea.
Support us by subscribing to the newsletter, sending news and information, adding events to the events diary and listing businesses and clubs in the Town Directory.
Complaints Procedure
Brightlingsea Info endeavours to adhere to the Editors Code of Practice. Our complaints procedure can be seen here.
Brightlingsea Info,
c/o Big Red Web Design,
7 Marennes Crescent,
Brightlingsea,
Essex CO7 ORX.
01206 305677
[email protected]
Sitemap | Terms |  Disclaimer |  Copyright Notice |  Privacy Policy |
© Brightlingsea Info 2022 | Maintained by
&nbspBig Red Web Design
SEARCH

Stay up to date with Brightlingsea news and events by subscribing to the Brightlingsea Info newsletter. No spam, just info about Brightlingsea no more than once a week.
wpDiscuz
0
0
Would love your thoughts, please comment.x
()
x
| Reply