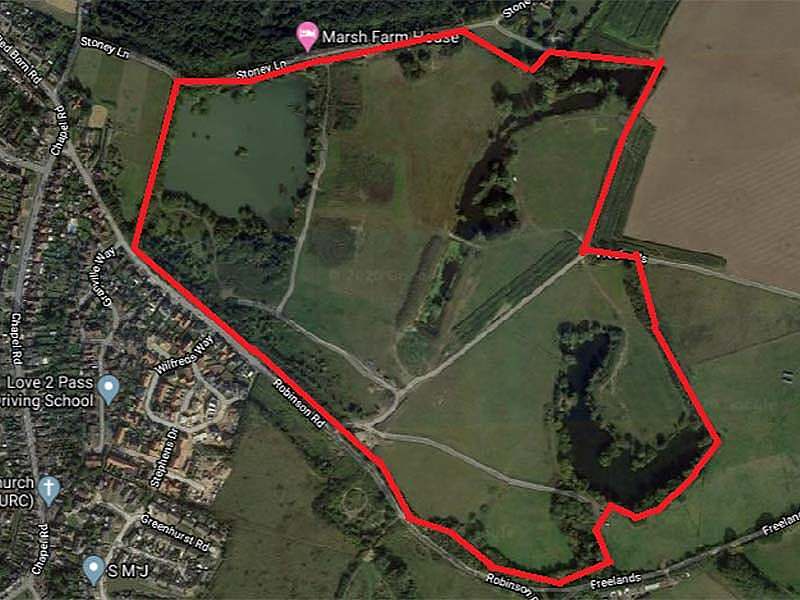 The site of the proposed development off Robinson Road.

A plan to turn a former quarry off Robinson Road, Brightlingsea into a holiday park and retirement village was approved by Tendring District councillors last night (September 2).

The proposals for the 81-acre Lower Farm site were discussed for nearly two hours by the council's planning committee, which eventually passed the application by James Blyth by seven votes to two.

The development as proposed would see 104 holiday lodges with up to four bedrooms, 36 retirement apartments, glamping areas, a club house, play areas and five detached houses built on the site. The five lakes would be used for sailing, canoeing and fishing. It's thought that up to 20 jobs could be created.

Under the terms of the approval, the applicant will have to make a £799,000 Affordable Housing Provision contribution – thought to be enough to pay for 12 homes – though councillors heard that these could be situated anywhere in the district and not earmarked for Brightlingsea. Until 50 of the holiday lodges are built, and associated paths, access roads and landscaping are completed, no more than 60% of the over-60s retirement apartments can be occupied.

Much of the discussion at the meeting concerned the loss of wildlife habitat, traffic congestion – particularly at Thorrington Cross – and disruption to people living nearby. Brightlingsea resident Susie Jenkins pointed out that that the Thorrington roundabout was said to be running at twice its ideal capacity and that fact had been a reason for refusing other schemes in the district. She claimed that the development would threaten one of "the last quiet lanes in Brightlingsea", and that it would not be genuinely sustainable.

"Green roofs seem like green-washing when there is a hot tub for every chalet," she said.

Brightlingsea town and district councillor Mick Barry also had concerns over traffic and holding the applicant to the conditions set out should the plan be approved. "How can residents be assured that the environmental and enhancement measures will be delivered?' he asked.

Brightlingsea Town Council originally supported the plan, but subsequently changed its stance to neutral, saying that it would like to liaise with the site owners to improve parking, sustainability of energy supplies and see the development of cycle paths linking it to the town. Towards the end of the meeting, a council officer said that Mr Blyth had indicated he would work with the council to ensure that their concerns were allayed.

Under the terms of the approval, the developer will also have to make public open space and Recreational Disturbance Avoidance and Mitigation Strategy contributions. Essex Wildlife Trust had objected to the scheme, saying the site was particularly important for migrating birds, but councillors were told that Natural England and Essex County Council ecology teams were satisfied that "with mitigation" the scheme would not be harmful.

The development, which the applicant says could take up to 10 years to complete, was said in a report to councillors, to offer "both direct and indirect employment opportunities within the local area; attract both national and international tourism; and, promote economic growth of the immediate and local areas".

Seen a pothole? Pavement cracking up? White lines faded? Report problems with roads, pavements, drains and verges to Essex County Council here.
report issues
Reunited: Brightlingsea paddleboarder's lost Go-Pro found in Cornwall
Robinson Road Leisure Park development recommended for approval – again
Don't miss the latest Brightlingsea news and information. Sign up for the Brightlingsea Info newsletter and stay up to date. Delivered once a week direct to your inbox. No spam guaranteed and you can unsubscribe at any time.
• To be a trusted source of unbiased news and information;
• To promote local businesses, organisations and events;
• To encourage a sense of community in Brightlingsea.
Support us by subscribing to the newsletter, sending news and information, adding events to the events diary and listing businesses and clubs in the Town Directory.
Complaints Procedure
Brightlingsea Info endeavours to adhere to the Editors Code of Practice. Our complaints procedure can be seen here.
Brightlingsea Info,
c/o Big Red Web Design,
7 Marennes Crescent,
Brightlingsea,
Essex CO7 ORX.
01206 305677
[email protected]
Sitemap | Terms |  Disclaimer |  Copyright Notice |  Privacy Policy |
© Brightlingsea Info 2022 | Maintained by
&nbspBig Red Web Design
SEARCH

Stay up to date with Brightlingsea news and events by subscribing to the Brightlingsea Info newsletter. No spam, just info about Brightlingsea no more than once a week.
wpDiscuz
0
0
Would love your thoughts, please comment.x
()
x
| Reply